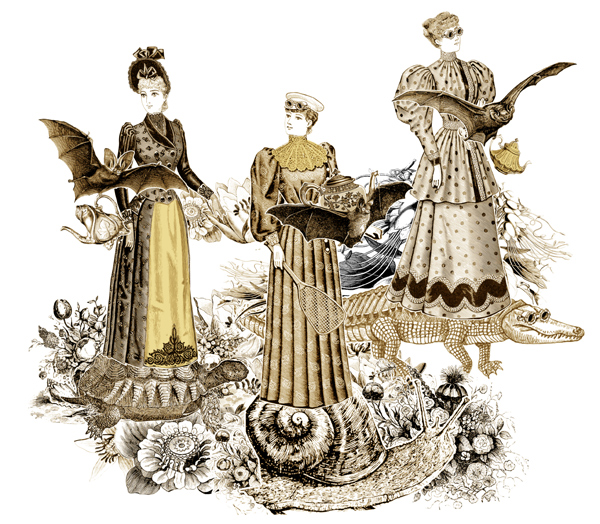 Flora, Velma and Fay,
Here to serve you with bat knowledge all day.

And just to warn you if you get too near,
We are all absolutely BAT-TEA here!

The sisters Von Tree are an eccentric trio. They were raised by their explorer aunts Bee and Gee. Through their early years they traveled nearly everywhere, including destinations beyond the veil in the Dusk Lands. They became little sponges of knowledge and from a very early age decided they were going to create a place where they could educate the world on the things they knew. Somehow, through wonderful and slightly nutty story about a flying fox they found in the Sky Lands, this decision came to fruition in an out of time place called Orange Moon Downs and what they had to share was everything that was to be known about bats.

The facts on that flying fox and how the sisters ended up running a bat themed after hours cabaret out of their Bat Emporium are a little sketchy. There are rumors that a few soft and whispery voices from the Black Cat and Poisoned Tea Society planted the idea, while others claim the sisters were simply obsessed with Emilie Autumn and wanted to put their own spin on the performer’s ideas. Whatever the case, when walking the streets of Orange Moon Downs, a person can slip into the Bat Emporium and get a Tea Bats Lenormand reading, or bat facts, or even–on special weekend nights–a truly unique performance by the sisters and their flying tea trays.