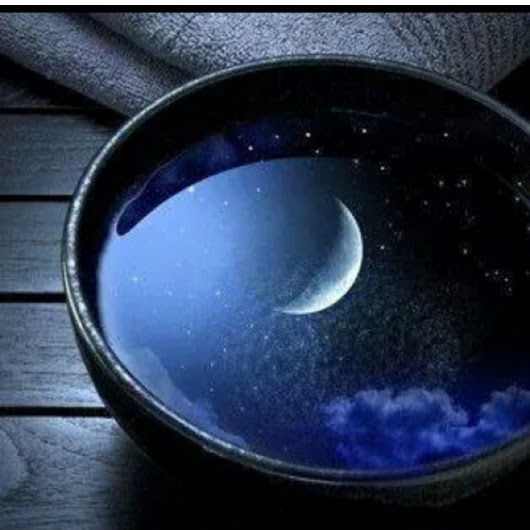 On this day in tea there were many serious moments that left a mark on the world. In 1606 the curtain would close on Guy Fawkes for his part in the Gunpowder Plot. He would be remembered for years afterwards with the burning of his effigy set to fireworks. In 1865 the United States Congress passed the Thirteenth Amendment to the United States Constitution abolishing slavery. In 1929 the Soviet Union would politely send Leon Trotsky into exile, the same year that smooth voiced actress Jean Simmons was born. And looking up to the skies, in 1971 astronauts Alan Shepard, Stuart Roosa, and Edgar Mitchell took flight in a Saturn V and set off for a mission to the Fra Mauro Highlands on the Moon. In the present day, there are many eyes looking up towards the moon.

In the wee hours of Wednesday morning on January 31st a trio of blanket and shawl wrapped females sat on their favorite balcony at the Hathor Boarding House. A young woman sat between two rather old gal bookends. Emily had her eyes to the sky as her aunt Emma and friend Minerva Mox carried on with casual conversation about celestial events in years past. “I declare this to be the most special moment for the moon for this century.” Miss Emma offered. “Here! Here!” Minerva barked as she watched the nearing dawn sky.

Young Emma looked up at the beautiful velvety night sky and felt overwhelmed by its beauty. Her eyes kept darting to the very full moon and a smile would cross her lips. This was an evening that reminded her very much of being with her mother. She always felt her mother was a star in disguise; a brilliant celestial creature who had temporarily come down to earth.

“Tell me again about the moon Miss Emma.” she whispered.

Miss Emma smiled. “This is what we call a super blue blood moon.”

“Sounds like a snotty moon that only hangs out with royalty.” Minerva snapped, but quickly had to try and hide her smirk. The young woman with them was well onto Minerva’s faux gruffness.

“Oh hush you old bat.” Miss Emma replied playfully. “We call this a blue moon because it is the second full moon during the course of the month and this is rare. We call it a blood moon because there will be a full lunar eclipse at the same time that will cast a reddish glow to it as the eclipse takes place. As for the super part? Well, the moon happens to be the closest it gets to the earth. It’s one of the most unique and rare celestial events and I’m happy to sit here among you both to view it.”

“Too bad we’re only going to get half a bloody moon.” Minerva observed.

Miss Emma stood without commenting and quietly moved back into the house, leaving the young and the old alone on the balcony confused. After a few minutes she returned with a silver tea tray in hand. Gently she sat it down on the narrow table before them.

“I have a special treat for us this fine pre-dawn.” She took up the silver tea pot and poured three cups of tea. “I have mixed for us tonight a tea just for this evening. This is a black tea with blueberry added to represent the blue moon. With that there is also pomegranate to represent the blood color of the eclipse. I then asked Mab, with help from her glass house friends, to create her infamous glowing silver fairy spun sugar cubes for the moon itself. And for the super? A surprise in cream form that can only be found hidden within the enchanted forest near to us. It has no name, but has the power to enchant your tea cups.”

She held up a small silver container that hid a bunch of silvery sugar cubes that had a faint glow. She added one sugar cube to each tea cup. Then she held up a sleek silver cream cup and gently dripped two dollops of the strange fluid inside of it to each cup. There was a strange sort of sighing noise that rose from the cups. Miss Emma offered a cup to her two companions.

Emily eagerly took a tea cup from Miss Emma and immediately let out a small delighted squeal as she looked down into it. The edges of the tea was a deep burgundy blue color that was much like the early dawn sky. In the center was a shimmering circle made of moving shadows and bright light that looked like her aunt had plucked the moon from the sky and placed it within the heart of the tea. She watched in wonder as the blue moon was slowly washed over with a reddish hue.

Miss Emma smiled warmly as she looked into her own cup. She took her seat again and pulled her shawl around her tightly and nodded towards the sky.

“And just to make things extra special, I called in a favor from a friend in my tea society. She promised me she would pull back the sky so that we might have a better view of this special celestial event.”

Emily eagerly looked up to the sky as something was beginning to shift up there. A humming noise was coming from it as clouds and the position of their night time skies seemed to be set aside. Emily felt as though they were put into a zooming motion and she couldn’t ever remember feeling quite so close to the moon.

Up above the moon that had already appeared quite larger than normal, was now massive and brilliant. It felt like they were suddenly sitting atop a tall mountain and the celestial sky was as close to them as it would ever be.

“For a moment we are somewhere else, in a place very high up, and we will be treated to the best view anyone could wish for. Now sip your tea ladies and enjoy.” Miss Emma sighed.

The young woman with her old gal bookends sat in silence as the eclipse began its washing over of the moon. Every now and then there was the sound of soft tea sipping and satisfied mmmmmms. It was the most perfect of nights, even if the January chill nipped at their noses. For that brief passing of time, all was right in the world.